Since many transcriptionists have modem Internet connections (usually 56K or 28.8K baud), it is desirable to create voice files that are as small as possible so that the download times for the transcriptionists are minimal. 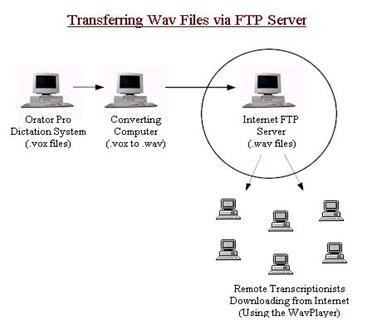 The Orator system initially records voice files in a “vox” file format. A .vox file is ideal for dictation systems because it provides constant pitch speed control. However, it is often not ideal for Internet file transfer due to file size considerations (usually about 28MB per hour of dictation). The Export Utility converts .vox files to smaller “wav” files, creating a 3.6MB file about per hour of dictation. A transcriptionist with a 56Kb connection can download a one hour .wav file in about 9 minutes. The transcriptionists can then use the Bytescribe WavPlayer product, or any software that plays .wav files, to transcribe these converted files.The diagram below shows the path by which vox files are converted to wav files and transferred to transcriptionists. 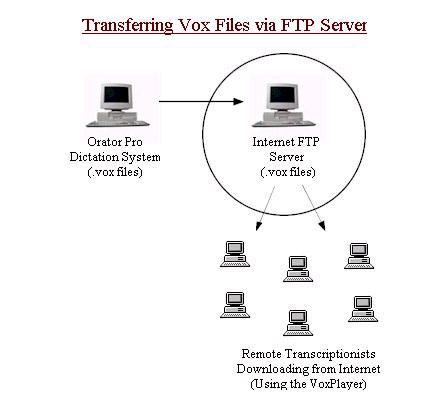 There are increasing numbers of transcriptionists or transcription companies that have high speed Internet connections such as cable modem or DSL connections. With these fast Internet connections the users are capable of downloading larger files quickly. In these cases it is not necessary to convert files from vox format to wav format. This simplifies the process by eliminating the conversion step. Vox files created using RecFormat=4 (see Chapter 5-System Configuration) can be sent directly to an FTP server for access by remote transcriptionists. The transcriptionists can then use the Bytescribe WavPlayer to transcribe these files. It should be noted, however, that use of RecFormat=4 generates a sound file that is audible but poorer in quality than the converted .wav file.

The diagram above shows the path by which vox files are transferred to transcriptionists.