The ReRecording Manager is a utility that allows unattended re-recording from other digital dictation systems into the Orator system. A script controls the operating procedure of each channel.

Double-clicking on any channel opens the Edit Channel Settings window for that channel. Within the settings window you can modify the operating parameters for the script, as well as creation/modification of the script itself. Specifically, a script tells a channel what number to dial, how long to wait before entering a user id, how many files to record, when to hang up, and so on. 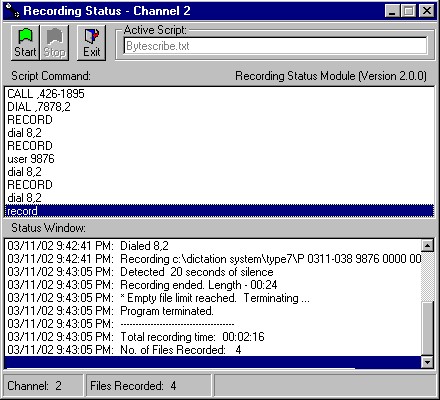 Below is a list of commands and their descriptions.

"PICK UP" Takes the line off-hook. This is similar to taking a phone off-hook.

"CALL <telephone number>" Example: "CALL,,2054259" This command will cause the system to dial the specified number and wait until it connects or until it receives some other signal such as a busy signal. If it has establishes a connection, it continues to the next line. Otherwise the script will terminate.

"DIAL <digits>" Example: "DIAL 1234,,45,,4456" This command will send the specified digits as touch-tones. The commas indicate pauses. This is used to send tones to respond to prompts by the other system.

"RECORD" This command begins recording a file into the Orator system. The file is saved in the directory specified by the PATH statement in the Settings file (autodial.ini). The command will cause the script to record until a period of silence is detected. The script will not continue to the next line until this silence is detected and the recording stops.

"HANG UP" This command causes the line to go on-hook. This is similar to hanging a phone on hook.

"CLOSE" This command causes the script to terminate and the program to close. Use this to completely exit the program.

"PATH <directory where to record files>" Example: "PATH c:\dictation system\type1\" This command is only necessary if you wish to change the path where the file will be recorded. Otherwise the program will use the default PATH in the settings file.

Sample Script The following script will call into a system, enter the access numbers, and record 3 files. It will then disconnect.