Many dictation systems like the Bytescribe Orator Pro initially record voice files in a vox file format. Vox files are ideal voice files for dictation systems because of they are well suited for the dictation hardware and they have the ability to provide constant pitch speed control. They are often not ideal for Internet file transfer because they are quite large in size (usually about 11MB to 28MB per hour of dictation). The Orator system has a utility that is capable of automatically converting vox files to smaller wav files. The wav files that are created by the conversion utility are about 3.6MB / hour of dictation. With this format, a transcriptionist with a 56Kb connection can download an hour of dictation in about 9 minutes. Transcriptionists can use the Bytescribe WavPlayer to transcribe these files or any software that plays .wav files.

The diagram below shows the path by which vox files are converted to wav files and transferred to transcriptionists. 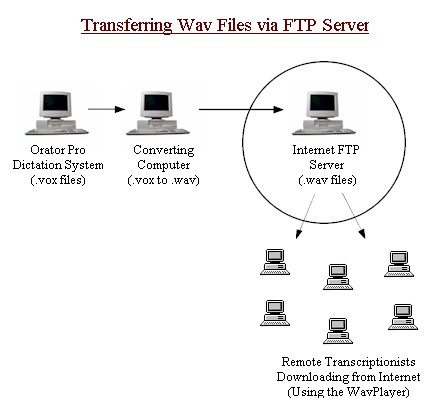